When you enable SSLVPN or HTTP/HTTPS for Management on your WAN interface on a Fortigate, the Fortigate creates global system Local-In policies. These are built-in policies that allow all traffic to the ports and services for SSLVPN and management on the WAN interface by default.

To restrict management from the outside, under the WAN interface, simply don't enable HTTP or HTTPS. That will prevent the default Local-In policy from being created.

If you do need external management access, you'll then need to create a custom Local-In policy to allow access on those ports from the network from which you'd like to access it. We typically add the entire company external subnet. Just be sure that this network is also added as a trusted host under your system administrator's account (System -> Administrators)
Custom Local-In polices can only be created via CLI. The following CLI commands will create this custom Local-In policy. These commands assume that you've already created address objects for your WAN IP named Wan1_IP and the public subnet named "External", a service object for your web management port named MGMT, and assume that your WAN interface is wan1.

The second option is to just leave those default system Local-In policies in place, but then to create custom Local-In polices to block access to SSLVPN and management services from IP addresses or countries that you don't want to have access
Again, since this is a cusom Local-In policy it has to be added via CLI. The following CLI commands also assume that the address and service objects have already been created for your WAN IP, for the countries you want to block, for your SSLVPN and management services, and that the WAN interface is wan1.

FortiGates not connecting to FortiGuard

Dec 30, 2019, 4:00 PM -06:00
We had a customer with multiple FortiGates that were reporting they could not get the Internet at multiple sites. In investigating, I found that the FortiGates at these sites did not have a connection to FortiGuard and were therefore unable to assess web traffic. Running the command get webfilter status from the CLI of the FortiGates that were having problems showed that they were unable to connect to the FortiGuard. You can also it in the screenshot below on the System > FortiGuard page:

The solution in this instance was to change the connection of how they FortiGate connects to FortiGuard from HTTPS to UDP. This setting can be found under System > FortiGuard. It can also be set via the CLI commands below:
config system fortiguard
set protocol udp
set port 8888
set update-server-location usa
end
It is important to note that all of the Fortinet products connect to FortiGuard to download definitions for licensing, web filtering, anti-spam, etc. If the connection to FortiGuard is down, there may be issues.
Fortigate,

When a secondary public IP address is utilized for VPN connections, the configuration of an IPSEC VPN versus an SSL VPN is quite different.  For an IPSEC VPN, it's as easy as turning flipping a switch and selecting the IP address:

For SSL VPN it takes a couple of steps: First a Virtual IP (VIP) has to be created that points the primary IP at the secondary IP.  Additionally include port forwarding for the SSL port to be utilized: 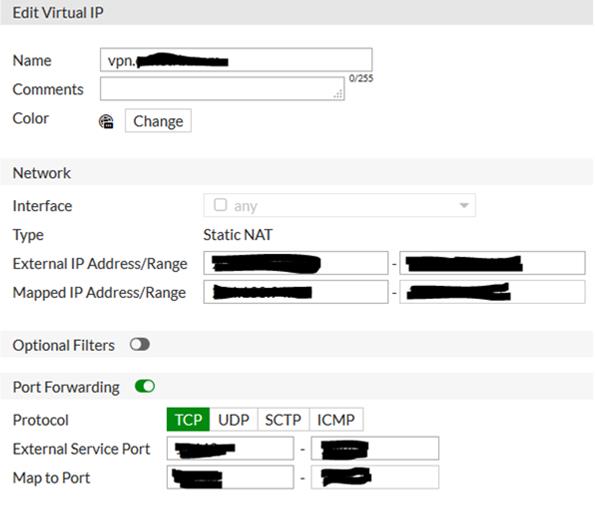 Second, an IPv4 policy needs to be created using the WAN interface for both incoming and outgoing, with the destination being the VIP: 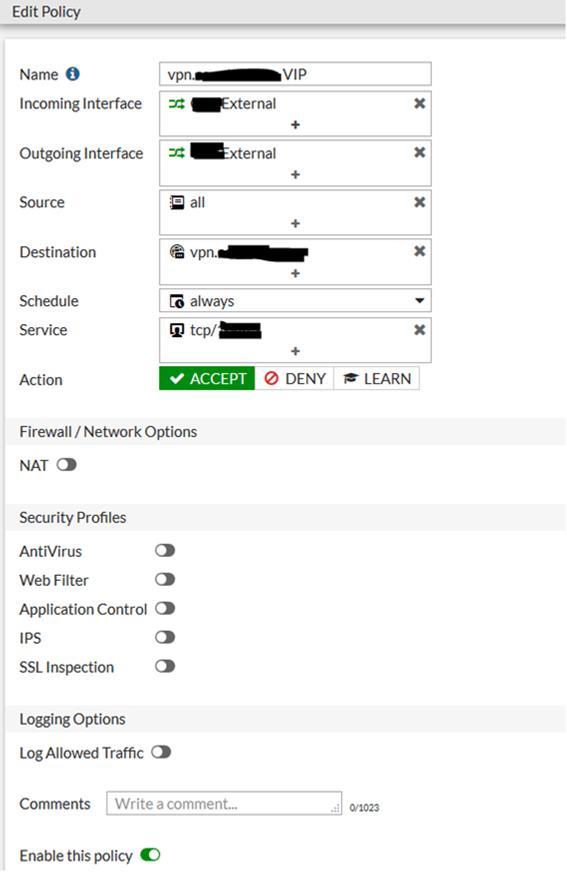 Installing certificates on a FortiGate managed by FortiManager

How to Initialize a FortiGate UTM Appliance for Disposal

How to initialize a Fortigate UTM appliance for disposal or re-use after it has been replaced by a new Fortigate appliance.

Power up the device. Interrupt boot by pressing a key during boot. A menu will be displayed: 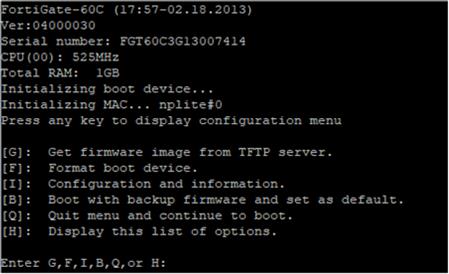 Select "F" to format the boot device, and respond "y" to the next question:

The boot device will be formatted and the appliance is now ready for disposal.

Part 1: When installing the Fortigate Single Sign-On Agent you need to configure the service account as a local admin on the server where it's being installed.  Fortinet support states that the account has to be a domain admin, but I have confirmed that it only needs local admin rights, and not domain admin rights.

Part 2:  When installing the Duo Authentication agent on a server to use multi-factor authentication with a Fortigate, it uses port 1812 to communicate with the Fortigate for Radius authentication.  If you have already installed the Fortigate SSO Agent on that same server it will already be using port 1812 to communicate with DCs on the network.  This will cause the Duo agent to fail to start each time you attempt to start the service.There are a couple of possible fixes to this:

Troubleshooting VPN from Fedline Fortigate through a Cisco ASA Firewall

Recently I was troubleshooting an issue with a customer who was having issues with their VPN connection from a Fedline Fortigate appliance through a Cisco ASA firewall. After taking a packet capture I saw that the Fortigate was responding to the ASA’s ARPs, but the ASA was ignoring them:

I turned on ARP debugging on the ASA and saw the following:

arp-in: src ip is same as one of nat mapped address 10.x.x.10 .Consuming the packet

A search led me to an email in the cisco-nsp mailing list email and Cisco Bug ID CSCuc11186 (Cisco login required). If you don't have a Cisco account, the relevant line from the bug report is:

NOTE: The fix for this issue may cause the ASA to not reply to ARP requests if the Source IP in the ARP request overlaps with a NAT rule on the ASA. This may occur when the NAT configuration line is overly broad (such as an all zeros configuration, or any. To workaround this, add the keyword "no-proxy-arp" to the nat config line.

The issue wasn’t due to the bug itself, but due to how the bug was fixed. Similar to the post in teh cisco-nsp group proxy ARP was disabled on the DMZ interface. However, proxy ARP was not turned off on the NAT rule.