Recently I noticed the fingerprint reader on my T450s had stopped working. I cleaned it, rebooted my laptop (twice), and it still didn't work. I went to Device Manager and didn't see Biometric Devices or anything resembling Synaptics, so I started researching what the problem may have been. I saw a lot of suggestions such as modifying registry keys and such, but I avoid those steps without proper supervision. Eventually I finally found a solution that fixed my fingerprint reader issue. Go to Settings\Apps\Apps & Features\Search for Synaptics and then select Uninstall. After the reboot, my fingerprint reader was working again. I went into Device Manager and confirmed Biometric Devices was there again, and made sure the driver was updated.

If you have a Lenovo laptop with a built-in battery and it won't power on or wake-up from a sleep state, you can use the pin-hole emergency reset hole (button) to resolve the issue.

Disconnect the power adapter and depress this button with a paper-clip or similar item. Wait for 1 minute, then reconnect the AC adapter or power up using the battery.

The location of the reset button varies by model. The location for a T480s is shown below (taken from the Hardware Maintenance Manual). You do not lose any settings or data. Best I can tell, this is the similar to removing a removable battery on older models. 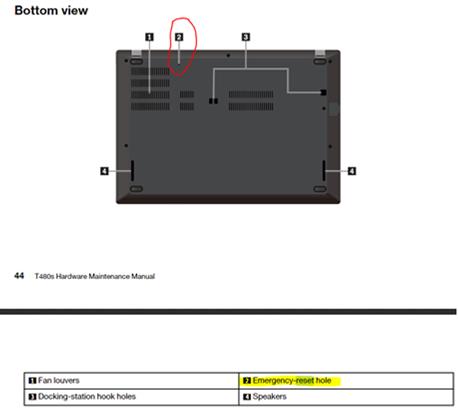 One of our information security auditors recently had the motherboard on his laptop replaced to fix the "shutdown on its own" issue he'd been having for a while.  When he got the laptop back, his BIOS level fingerprint logins (to unlock the hard drive and BitLocker key) were no longer working.  Also, the x64 VMware machine he uses for audits would no longer boot.  The VM issue was pretty clear.  The CPU virtualization setting in the BIOS was disabled and needed to be turned back on.  The fingerprint issues, however, took a little more digging to figure out.  Eventually we realized the TPM on the new motherboard was not activated.  Once we activated and initialized the TPM, then turned BitLocker off and back on (without decryption), all the pre-boot login information unlocked by the fingerprint started working again.

Watch Out for Restore Points! I have been issuing new laptops to users and everyone seems to be having the same problem with the Lenovo Fingerprint Reader and Windows logon.   After installing the finger print reader software, I noticed a link to an article for users that were trying to logon to a domain using their fingerprint.

To enable the Windows or domain biometric settings in Control Panel, do the following:

Here is a link to the Lenovo article: http://support.lenovo.com/en_US/research/hints-or-tips/detail.page?&DocID=HT051327

Fingerprint Authorization Not Working Initially on ThinkPad With Windows 7

Upon receiving my new Lenovo ThinkPad laptop, I set up fingerprint authorization through the Lenovo software.  After ensuring all my fingerprints were scanned properly, I rebooted the machine.   I tried to the use my fingerprint to login and the light flashed green.  Unfortunately, the machine wouldn’t proceed any farther in the process.

It appears you have to go into Windows 7 itself and enable ‘Domain Login’ under the Windows Biometric section in order to actually allow domain authorization.  Otherwise, the software will just let you access local accounts.

Utilities for Help with Laptop Overheating

I am having trouble with my machine overheating. I found two useful tools to look at the temperature on the cores of the processor.  The programs are:

RealTemp - This program will monitor the temperature on each of the cores (for any modern Intel processor) and also periodically log the results to a file.

Windows 7 Laptops Not Shutting Down Completely

Several of us have noticed that when we shutdown our laptops that the OS seems to stop but the fans do not stop. This is especially harmful when you then put the laptop in a bag and later retrieve it to find it extremely hot.  It turns out that there is a problem with Windows 7 when using Bitlocker that exhibits this problem. The details can be found at http://support.microsoft.com/kb/975496.  Lenovo has published this patch on the System Update site for the T400.

This is also an issue with Windows Server 2008.

I upgraded from Vista to Windows 7 about three weeks ago.  I decrypted my PGP encrypted drive before the upgrade and, after the upgrade, PGP recognized my disk wasn’t encrypted and prompted me to encrypt my drive.  I started the encryption process but wound up pausing the process because of slow performance, intending to resume it after hours.  I installed some Windows and Lenovo (ThinkDamage…probably my 2nd mistake) updates which required a reboot.  After the reboot, PGP started trying to install itself and produced this error message…

A coworker suggested I log a ticket with PGP.  After doing so, I was poking around their site, searching for various terms from the error message and stumbled across a reference to a command line command.  About that same time, I received an auto-response from PGP which included several links, the last of which (https://pgp.custhelp.com/app/answers/detail/a_id/1850) led me to information about the same command line command, pgpwde.